I woke up in the morning at Ogawara. Wishing I could have just one extra hour of sleep. I left at 10 am. I was not in a rush to get to my next destination as it was only 13km to get to Shiroishi. It was good that I was not walking that far as the heat from the past two days and today was slowing my pace. I chose to take a less direct route as the highway was becoming a bore. I was glad I did as I saw some amazing views of fields, mountains and rivers. 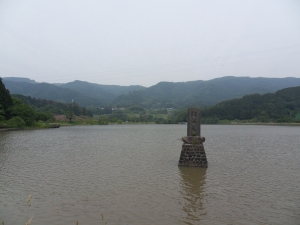 The amazing views I see daily.

I arrived in Shiroishi at around 2:30pm. I had a large park on my map that I was to stay that night so I had time to chill. I sat outside a 7-11 for a while and had some food and relaxed. I then walked my way to the park. It was a big park and further on was a golf course. It had plenty of places for me to camp. There was a small area in the centre of some hedges where I could not be seen or bothered and put my tent up. It was a much more relaxing and quiet area than the last place I camped so I was happy. 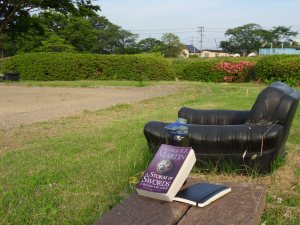 After I set the tent up I noticed there was a small area of grass that had leather lounge chairs and couches that I assume people have brought to watch local baseball games and the like. I sat down, read my book, watched the sun go down and went to sleep.

I woke up the next morning soaking wet. It appeared the humidity from the weather and inside my tent caused it to condensate and made water droplets on the inside roof and drip down all over me and my stuff. Not the greatest way to wake up in the morning. For a second I thought I wet my pants in my sleep. I hopped out, packed everything up and headed off again.

Around half an hour down the round I saw a McDonald’s. I had not eaten anything the night before so I was starving. They had just opened for the day so I was their first customer. I ordered the big breakfast. I had hotcakes, hash browns, scrambled eggs, sausage muffin and orange juice. It was amazing! After I was satisfied I continued on down the road. Saw some more awesome scenery. The heat and humidity was rising again so I stopped a couple of times to rest. At one stage I was contemplating stopping completely. I was tired, hot and my hands were peeling all over from the walking poles. I talked myself out of it and pushed on.

My hand after days of walking.

I made it to Fujita. I was going to stay there the night. I could not however find anywhere to stay and my tent was still wet so did not want to have to sleep in that until it dried out, there was one hotel I found but it was closed down and falling to pieces. The closest one I could find was another 10km away. I couldn’t walk any further that day as it would be dark by the time I got there. I was going to get a train. I then realised that Fukushima was only another 5km. I walked to the train station and went four stops and made it to Fukushima.

Now I am far away from the leaking nuclear power plant here in Fukushima so do not worry. I wont be coming back with super powers or anything unfortunately though. They are currently constructing a way to freeze the soil under the power plant to slow down the nuclear waste leaking into the ocean and water supply in the area. Sounds very innovative and I hope it works to give them more time to figure out a way to stop it completely.

I got to a hotel and the first thing I saw was a menu for Pizza Hut! I knew that I needed to have it. I went down to reception and got them to call for me. I ordered a Hawaiian and a BBQ Chicken. When they told me the price I was amazed at how cheap it was. Two pizzas and delivery for only $6.70 AUD! I was over the moon. I went upstairs and waited. While I was waiting I was still thinking about how cheap it was, so I double checked the conversion rate and discovered I was very, very wrong. I was so wrong that it ended up costing me $70.00 AUD! This is more than what I spent on the hotel. One thing I can say though is that the pizzas were very good and I have made them last so I haven’t needed to buy food for three days.

I will continue on south again tomorrow. My plan is to be in Tokyo at the the end of the month and then tackle Mt Fuji.

Please remember to share my link of my everyday hero site to continue to raise money for The Telethon Adventurers. Every little bit counts.