What a month it has been!

It has been quite some time since my last entry so my apologies for that. I left Tokyo city on the 2nd of this month and started making my way to Kawasaki. I was back into the swing of things after having a week of being a tourist in Tokyo. It was a hot and humid day. Buildings as far as the eye can see. Even with the large number of tourists the city gets I find I am still being stared at more than most. I am assuming it is because of my huge pack. 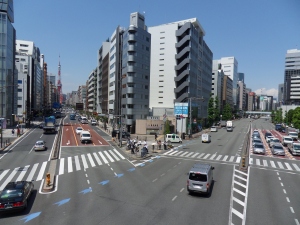 I arrived at a small town called Kamata and decided to stay there the night in a capsule hotel. I unpacked my things and headed for the spa for a soak. When I returned to my capsule to relax I had a problem, my laptop would not start. This was an issue as I had recent videos and photos of the trip on there that I had not backed up yet. I tried to repair it myself but had no idea what was the cause. So I got in contact with some IT experts. They wanted for me to bring it in but I was not sure who to choose so ultimately it came down to price. In the end I chose a company that had a reasonably cheap fixed rate, good reviews, but could not see me for a week.

So I had to stay at the capsule hotel until it was repaired. One day I caught the train back to Tokyo city to see some more sights. I went on the Daikanransha Ferris wheel in the Odaiba area which had a great view of the city and the bay.

I then went to Madame Tussauds to hang out with celebrities.

My personal favorite. Better than the Oscars selfie for sure! 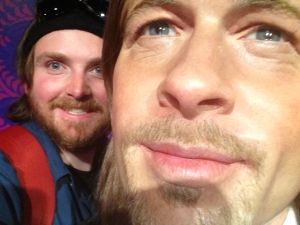 The rest of my week I decided to cut back and save some money. So my daily routine would start at 9:30 am with music blaring from the speakers to wake everyone up. Then housekeeping would come and clean. I would get out of bed and put my stuff in my locker and go to the common room and have an ice coffee. I would move around the room getting out of the way of the cleaners. At 11am I would go back and get changed. At midday I would go downstairs and get some lunch and go for a walk. At 6pm I would go down to the spa and soak. The rest of my night would consist of me watching movies on YouTube via my iphone or watching Japanese TV. It reminded me of some sort of correctional facility, with the exception of being able to come and go as I please and without the risk of being violently assaulted. Bunk beds, communal dining, communal showers, communal toilets and everyone wearing the same blue shirt and shorts they give you when you arrive. There were a couple of older men who appear to live there all year round. I imagined they were Red and Andy Dufresne from The Shawshank Redemption. Towards the end of my stay there I got talking to them about once a day and would call them Red and Andy when I said hello.

I dropped my laptop off for repair and was informed it would be ready to pick it up in two days. Five days later it was ready. Due to the time it had taken to repair, my chance of walking to Osaka was now gone. I did not want to walk straight from there to Osaka and then just get straight on the plane without seeing any landmarks such as Kyoto. I tried looking for places to buy a second hand bike but they were out of my price range or not sufficient enough to make the trip. I decided to get a train to Osaka. So I am now using it as a base of operations for the last two and a half weeks of my time here.

I am now in Osaka staying in a hotel. Well, I say hotel but it’s far from even being a motel. Gordon Ramsey would go mental. For $9.00 AUD a night though I can’t expect too much. While unpacking what I could in my room I found a syringe stabbed underneath the desk. There’s no bed as it is a Japanese style room. The window doesn’t close, but that doesn’t matter as there is no air-conditioning. My view out the window is into another person’s room. As there are no curtains we can see each other. He also leaves his light on all night which means my room is saturated in fluorescent light. That’s ok though as it keeps me awake to be able to see the cockroaches and bugs crawling on the floor. Also sometimes people off the street seem to come and see if there are any spare rooms left unlocked. So at around 1-2 am someone checks my door. I did go out once and it was an old frail person looking for somewhere to sleep. Poor dude. 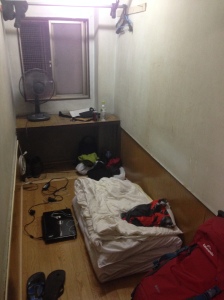 On the 23rd I went to Universal Studios. I was super excited. It has been ten years since I was lucky enough to see the one in Los Angeles. I got there at 9 am and went on the JAWS, Back to the Future, Jurassic Park, The Amazing Spiderman, Harry Potter, Hollywood Dreams and Terminator 3D ride. It was awesome. It is hard to explain so I have made a video of my experience there and will post it shortly. Majority of the time was waiting in lines but they were all worth it. Melbourne really needs to get its act together and have a theme park.

The Harry Potter World had only been opened for a week so it was packed. It was amazing how accurate and real it was. If it was not for the sweltering heat it would have felt like I was at Hogsmeade. I had a delicious frozen butter beer. The Harry Potter ride was the best ride I have ever been on, it was a mix of simulation and  roller coaster and 4D technology. I would have gone on it twice if it was not for the two hour line. I then had lunch in a replica of Mel’s Drive-In from the George Lucas film “American Graffiti”, watch it if you have not already seen it. Late afternoon ended up being a bonus for me, because I was there by myself I was able to cut to the front of the lines for Jurassic Park and The Amazing Spiderman so I went on them more than once. Jurassic park is an awesome ride so I went on that the most. Plus you get soaked with water at the end so it cools you down. The day ended by watching the magical light parade which consisted of huge light covered floats of Elmo, Alice in Wonderland, Arabian Nights, Cinderella, Snoopy and Hello kitty. A great finale to a great day out.

Thanks to everyone who has donated so far! Do not forget to share this blog and the link below to allow others the chance to get involved in raising money for child cancer. We are so close to reaching the goal of $2k and I would absolutely love it if we can achieve more. Every little bit counts.