The Kindness Of Strangers

It was my first night in Sendai. I headed out to find somewhere for dinner. I found a very large shopping district. As large as the one in Sapporo when I began my journey. I figured I was bound to find something to eat here. I walked past a British style pub. I decided to go in and have a look. I walked in, sat down on my own and had a cold pint.

Around ten minutes later I noticed that the group of people on the next table seemed to be having a really fun time. So I went over and started talking to them. We had many beverages and fun times for the next few hours. They all spoke English so it was a nice change of pace. At 12am we were asked to leave as it was closing time. I said my goodbyes and headed back to the hotel with an abundance of potato chips as I did not end up having dinner and thought at the time potato chips were the best thing in the world. 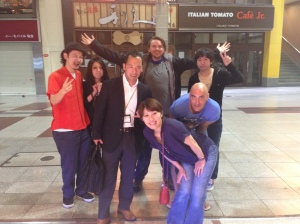 I woke up the next morning feeling a tiny bit hung over and with chip packets all over the place. I could not let it slow me down as I had planned to head to the Sendai Castle today. I went down to reception to hire a bicycle. I was told that they did not have any available as they were broken. Most likely from people having the same strong relationship with gravity that I had while riding. I had to walk. Before I went on my trip I most likely would not have walked thinking it was too far but things have changed now and was not that far at all.

As I walked to the castle I went back through the shopping district from the night before. I looked at all the bicycles for sale and was amazed at how cheap they all were, around $90AUD. On the way through I found an item in the cosmetic section called Placenta Jelly! Didn’t find out what it was for but had to get a photo of it.

I continued on to the castle. There was a very steep hill to climb to get to the top, I was glad I did not have my gear on my back. When I made it to the top it was a large area of land with great old statues and what looked like renovated temples. There were some guys dressed up who came and spoke to me. One was a Japanese poet, one was a Samurai and the other was a Ninja. They told me the history of the castle and how the city of Sendai began. It was an amazing view of the city from up there. I could only imagine at how awesome it would look at night. 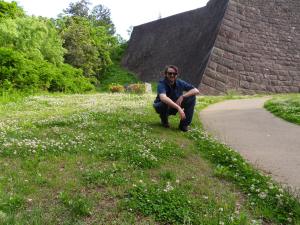 I left and headed back to the hotel. The hotel had a laundry so I did mine for the first time since arriving here. I have had to wash my clothes in the sinks at places I have been staying. It was nice putting on clean clothes after so long.

On The Road Again – Sendai to Iwanuma

I woke up the next day and was out by 9:30am. Headed south to Iwanuma where my next stop would be. Nothing interesting occurred during the walk. The weather has definitely heated up and will continue to rise the further south I go. A new challenge for me to overcome. I arrived at Iwanuma around 5pm. There was a park where I could camp but discovered it was a shrine and did not want to be disrespectful so I found a place to stay called “Hotel”. My head was hitting the ceiling when I stood up but it was a comfy bed so can’t complain.

I woke up the next morning from reception talking over the loudspeaker outside the room for some unknown reason. I was out by 9:30am. Went by a 7-11 and filled up my water bottles. It was going to be a hot day so I made sure to cake myself in sunscreen. I just hoped I did not cause a car accident with my pasty skin blinding the drivers going by.

Not much happened during the walk. There were some great scenery so I stopped occasionally to rest and take some snaps. I was only walking 16km so I took my time. It was good I did as the temperature got above 32 degrees and slowed me down. From snow to 30 degree temperatures in less than two weeks, my body had some trouble adjusting. 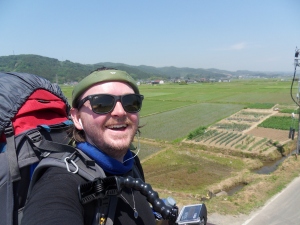 I was just outside the town of Ogawara where I was to stay that night so stopped at a 7-11 and refilled my water bottles and had a rest. There was a hotel I googled the night before that was nearby. I walked back into 7-11 and asked them where the hotel was. They knew it and pointed me in the direction. I went back outside and was putting my gear on when the lady that worked there came out and gave me a cold bottle of lemon water. She then directed me inside the store to the Air-conditioning. As I was enjoying the cool air she came over again and told me that she has ordered me a taxi to take me to the hotel as they said it was too hot to keep walking. I accepted the offer as I read before I started my journey that it was impolite and disrespectful to decline gifts and offers from people. I jumped in the cab and went two minutes up the road to the hotel, checked in and had a nice relaxing bath.

It amazes me how kind and helpful everyone is to each other and to me in this country. They say Canada is the nicest country in the world but I would strongly disagree.