I woke up in my comfortable bed at the Koganeyu Hot Springs at 7:00am, feeling extremely relaxed and refreshed. Had Breakfast, got my gear all sorted and headed out at around 9:30am. I was pumped and ready for anything, which was a good thing considering what I encountered along the way. I started down the same road I was on since leaving Sapporo and would continue to be on it until I reached my destination at Nakayama Pass late afternoon. It was all looking up. The road I was on had a nice stretch of footpath and the sun was shining. I even made sure to put sunscreen on this time. About an hour in I approached my first tunnel. The footpath was still there so I stayed on it and all was well.

I was going good and making great time. At this rate I thought I could be there before 4:30pm. At around 11:30am the footpath ended so I stuck to the grass when there was some or hugged the side of the road when there wasn’t. I shortly arrived at my first bridge and as the footpath was gone there did not seem to be a way across it without the risk of being squished like a bug. I was stuck. I looked for an alternative. There was one, but it was not going to easy.

Next to the bridge there was a hill, a steep hill. It appeared to make its way under the bridge and back up to the other side.  So I went for it. I slowly and carefully made my way down. Knowing that one false step could mean game over. Chance of rescue would be slim as no one would see me or even know I was down there. I made my way almost to the bottom. There was a steep hill around 1 metre high that I was not even going to try sliding down with my pack on. I didn’t want to have to take the pack off either. I found a tree near the edge and thought if I stand on the edge and fall towards it and grab it with my hands I could climb down. It was the only chance I had and if I messed it up I would get a face full of tree then gravity would do the rest, and then I would probably wake up being eaten by a bear or something. I threw my walking poles down, steadied myself and flung towards the tree. I got a grip on it, but I almost lost it as the weight of the pack was pulling me. I slid down and was pumped for the next hurdle.

The next challenge was a reasonably flowing river going under the bridge. I found the shallowest point and slowly made my way across. As I was crossing it began to rain. I knew that if I was down here any longer the hill would be too soft and slippery to be able to get back up to the other side. I made it across the river and with the help of a few fallen down branches I climbed back up and made it to the other side.

Not long after that I came to another bridge exactly the same. There was no way to get down and if I kept on going under them I would not make my destination in time. So when it was safe enough I ran across. I felt I deserved a rest so I sat myself down on the grass and had some lunch.

I headed off again along the side of the road for about two hours. The rain was really pouring down now so I was soaked. I assumed I was very high up in the mountains by this stage as I could see snow and clouds below me. I walked through some small tunnels that luckily had no cars come through. There were road works all along the road and the workers were all really nice and friendly to me. Some even let me walk through the closed off areas so I wasn’t near any cars. One man even patted me on the back and said something which I can only assume was to cheer me on. I was wondering why they all seemed so surprised to see me walking and why they all looked so confused when I pointed in the direction I was going. I soon discovered why.

I got to a long curved bridge that had a shoulder width for me to walk on between the barrier and the cars. That was an interesting and daunting experience. The bridge then went into a half enclosed tunnel which had nowhere to walk on except the road. There were small ledges I could stand on every few metres or so to get out of the way when cars came. Luckily for me that the road works they were doing meant that I could time the flow of the traffic to count how long I had to make it to the next gap. After I made it out I was certain that it could not get any more difficult than that. Boy was I wrong!

I came around another bend and what appeared before me was the entrance to a fully enclosed tunnel that went for about a kilometre. It reminded me of the tunnel Marty McFly had to hoverboard out of to escape Biff Tannen in “Back to the Future II”. If only I had a hoverboard. I got my head torch out, put it on and made my way in. It was a tight squeeze, the trucks were coming in especially fast and every time they flew by the wind from their wake almost knocked me onto the road. I hugged the wall and tried to get through as fast as I could. I was in there for about 20 minutes until I finally felt the rain again. I do not think I have ever been so happy to see rain. 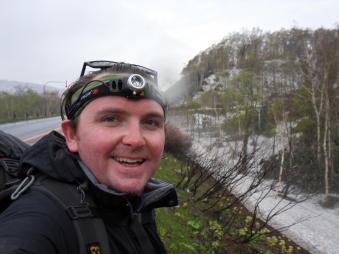 The mountains continued to climb and the temperature was dropping. When I would stop to take a photo I would start to shiver so I decided to just put my head down and get to where I needed to be. I arrived at Nakayama Pass at around 5:30pm. The fog was thick and the temperature was low, and my clothes were wet. Not a good combination. I needed to find somewhere to stay and quick. There was not much there besides an information centre and supermarket and they were already closed. I managed to meet a nice young guy who gave me something to eat. I asked him if there were any places to stay or camp for the night. After remembering some year nine drama skills I managed to act out what I was asking him and he understood. Unfortunately for me though there was nowhere to stay and I could not camp just anywhere because Hokkaido is apparently where brown bears live. I really should have studied up more before I got here.

The nice guy rounded up a couple of his friends and they told me there was a place to stay in the next town but it was another 24km away. They walked me to a bus stop, gave me a fried tempura potato ball and sent me on my way. There must have been a mix up because when the bus stopped I was in a town called Toya. About two or three days walk from where I was. So I was very far ahead of where I should have been.

It was around 7:00pm so I was too tired to care at that stage and just wanted to get some rest so I went into the first place I saw and booked a room. It was a traditional Japanese hotel so when I got to my room there was no bed. A short Danny DeVito looking man walked in and pulled a mat out of a drawer and put it on the floor and put a blanket on it and said “Bed”. When he left I threw my things down, hung my wet clothes up and went to bed.

Today I slept in till about 8:00am. I cleaned up and got my gear ready for another walk. I decided that as I was now ahead of schedule that I would only walk 17 kilometres to a town called Date. I thought I would take an easier walk than the previous day. I walked along a new road. It was along a lake which had Nakajima Island in the centre of it which was basically a small mountain. It was a cloudy day so I did not put sunscreen on. It looked as though it might rain. I came to a turn that would lead me to Date. As I got further down the road it began going up, and up, and up. It was the steepest incline of the trip so far. Luckily there was a footpath all the way up. As I got to the top I could see a dormant Volcano. It was huge and had steam or smoke coming out of the cracks on the side of the hill. It appeared to be a tourist spot because there were chair lifts to take you over the top and there was some kind of Geology convention happening. I decided not to stop too long and continued on. Some tourist ran after me and wanted to take a photo with me. I must look strange to them I guess. Tall handsome guy walking on his own in the mountains. I guess I can’t blame them, who wouldn’t want a photo with me.

After a long walk through winding roads and one long tunnel with a footpath I made it to Date unscathed (well i did get sun burnt again because I am an idiot). I am in a very lovely hotel and am taking an extra day seeing as I am ahead of schedule.

I have uploaded a video of my walk on day 2. It is a very rough edit and my apologies for the sound. My water bottles were hitting the camera case.

Thank you to those great people who have donated to the Telethon Adventurers via my everyday hero site. If you haven’t already and would like to know how please click my link below.

3 comments on “Bridges, Rivers and Tunnels”